As I was poking around my garden last fall, adjusting to my vision and letting the new wonders reveal themselves to me, I decided to keep my big smokebush, Cotinus ‘Grace’.

It is a monster of a shrub, every year growing way beyond its allotted space in my mixed border.  Until last November I had decided it must go.   But as I stumbled around looking for new juxtapositions and inspirations for my photography, I stuck my head into the border to surround myself with the orange glow of its leaves.  They were everywhere, tangled up in the tapestry of my border.

Garden tapestries are an ongoing theme of my work.  I try to find interesting foliage compositions, and to make them work for me as photographs, every bit of the frame needs to be in focus.  When one element of a potential tapestry, such as Cotinus ‘Grace’ gets too big, it is near impossible to make a tapestry, and I had made few photographs of her the garden.

But now as I look for new photographs and because my eyes could not focus together, every step in my garden generated new ideas, and I began to see ‘Grace’ in new ways. And last November was a good year for its color.  She’s a keeper now but, glancing out my window, still one of those pruning chores that I have not attended to.  (So, why the heck am I writing this blog when the garden chores are so neglected…)

It is a bit difficult to recreate the same impressions I had about this image when I first took it three months ago. It is a difficulty I am having with all those early images after the first surgery.  The vision is changing and I do not see the way I saw then.  Even if the garden had not changed I doubt I would see the same pictures.

I remember being struck by rich color of the leaves as I stuck my head into the border looking for something to register.  I had to nearly put my face onto the leaves for my left eye to see while the right eye saw whirls of Melianthus and Berberis foliage. 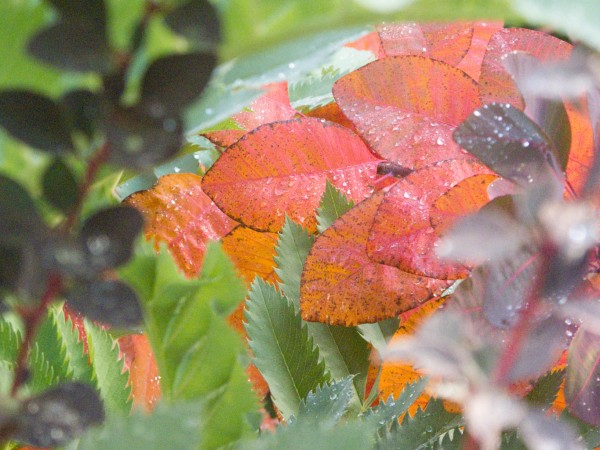 As I try to re-create the memory, I debate with myself how much of the entire scene to reveal in the final photo.  As you can see from my raw image (above) I did a bit of cloning and enhancing in PhotoShop, but I also wanted to apply a blur filter to really draw the eye to the Cotinus leaves which were what inspired my left eye.

The question I have not solved is how much of the blur filter do I want to use. If I use a lot, such as the opening photo, I lose much of the tapestry effect that my right eye included.  If I use it a little less blur, like this second version below, I lose some of the graphic impact of the leaves. 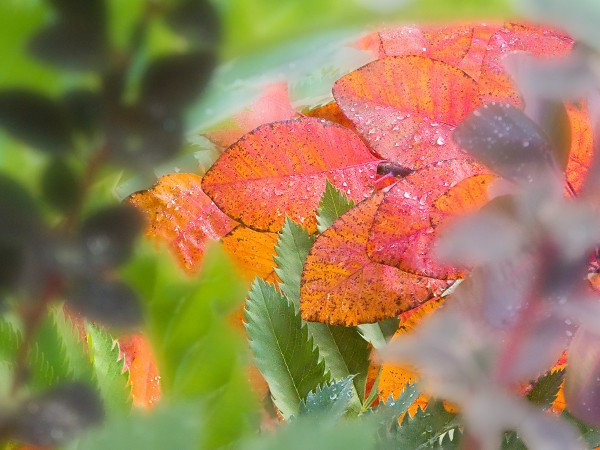 Hmmm . . .  Maybe there is an entirely different way to approach this.  Instead of a blur filter I use the brushstroke tool to manipulate the other foliage instead of blurring it ?  No time now to figure out another PhotoShop tool.  I think I will go prune that shrub.