Here’s the deck behind my house, sideways and blurry.

The very day I went to see the eye doctor, I shot a video of the deck after talking with an editor at Taunton Books about future projects.  I used the video feature of my G11 camera to shoot the deck as a potential photo location, but did not get around to preparing the file before my appointment.

Little did I know I had a detached retina and would be whisked off to University of San Francisco Medical Center that afternoon as if it were a medical emergency.  There is no denying the queasy feeling of several doctors hovering around examined me, knowing the Giant’s best pitcher, Tim Lincecum, was off to a shaky start in the first game of the World Series.  Fortunately, the resulting procedure that night, a pneumatic retinopexy, was done in the clinic and I was able to keep up with the game because my brother, Mike, had his smart phone.

The Giants ended up routing the Ranger’s best pitcher; and I had to begin holding my head sideways so the gas bubble in my eye could hold the retina in place.  Real queasiness set in.

My vision is not only quite blurry in the left eye, I can actually see the gas bubble.  And actually it is not one bubble but a little foamy gathering of dark shapes much like what I added to the photo above.  Over the next few days the little bubbles joined together and the gas bubble was absorbed.

I find it fascinating that the bubble moved around my eye as I turned my head.  I would occasionally look straight down, out of simple curiosity, and found the vision was a little better, but as if looking through a giant bubble wand, the kind that kids play with, a very blurry halo.  Looking for a way to express this with a photo I shot this Echeveria sitting in a pot on my driveway. 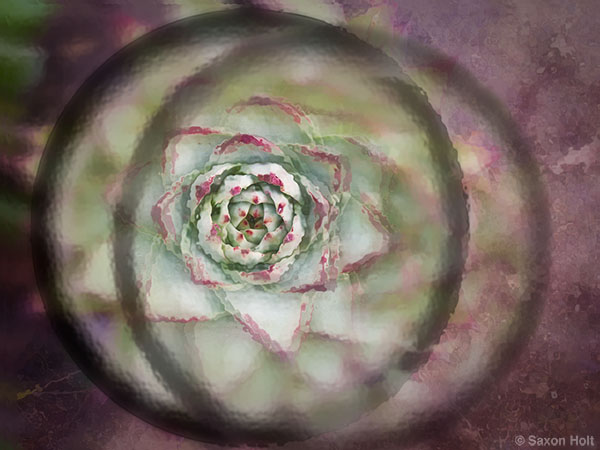 Perception is a strange thing, each of us brings our own set of assumptions as we interpretation things around us.  Finding ways to express this and to tweak our normal assumptions about how we perceive the world is a very useful thing for artists.  This may provide me with some great new ideas.  Can’t wait to be able to use the computer again when all this clears up.

But the procedure did not work and the retina is still detached.  Now what ?

Tupelo Impressions, After the Fall